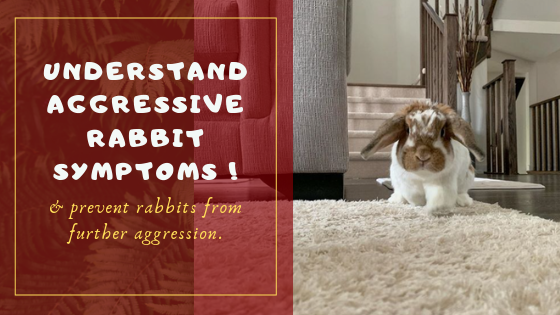 It would be a lot easier for you to prevent your rabbit’s aggression if you can comprehend with your rabbits’ aggressive behavior.

In this post, I will help you to get a grasp of your rabbit’s aggressive behavior and stop your rabbits from getting aggressive towards other rabbits or when inside a rabbit cage.

After reading this post, understanding aggressive rabbit body language will not be a trouble for you. You will realize how to pet a rabbit and handle them with care so your bunnies will be good bunnies.

A rabbit is not aggressive by nature. A rabbit may only show signs of aggression when they are scared and try to protect them and their territory from danger.

Being a prey animal a rabbit is very territorial and are easily scared.

There are some easy signals which are noticeable when your rabbit is trying to be aggressive:

Besides doing their best to protect their territory, a house rabbit will be hostile during several other events.

The common reasons for your rabbit to get aggressive are as follows:

How to make your rabbit less aggressive?

In order to make your rabbit less aggressive, a rabbit guardian must try to break his/her rabbit’s fear.

Fearful rabbits are extremely territorial. As prey animal rabbits are frightened easily and want to prevent their territory by getting aggressive.

No rabbits are born aggressive though every rabbit has a unique character. A rabbit builds its aggressive character in time due to many purposes which I have mentioned above.

One of the common reason for hostility in rabbits is due to a rabbit guardian is handling his/her delicate house pets in the wrong way.

To understand how to pet a rabbit properly you can read here.

Rabbits are frightened very easily and if they are scared of you and can’t be relaxed around his/her guardian, they will be aggressive towards you.

Therefore you have to allow an adequate amount of time for your new house rabbits to get comfortable around you and trust you.

Once your rabbit starts to trust you, in no time your rabbit will learn to become less aggressive and begin bonding with you.

As you try to bond with your rabbit slowly just stay aware of all the above mentioned aggressive behaviors.

If your rabbits show the symptoms while you intend to bond with them, it is best to stop trying to bond at that time.

Give the rabbit some more time and try bonding again later. You have to allow time for your rabbits to trust you. Once your rabbit trusts you, they will get close to you by themselves.

When I brought my first rabbit home, I planned to raise it cage-free. So I allowed my rabbit the living room to use as her running space.

As well as I litter trained my bunny so that she will not poop and pee everywhere in my living room.

In the beginning, my bunny she always liked to hide under the couch. As she seemed scared of me and decided to sleep in a dark place where she thought is safe enough for her to relax.

I never dragged her out or disturbed her while she was hiding under the couch. I did not want to stress her. She was already a stressed bunny from the new place she moved in.

However, as slowly time passed by, probably after two weeks. my bunny started to come outside from under the couch and sleep on the couch.

Meaning she was starting to be relaxed and get used to in her new home and with the new environment.

As some more time passed by she started to bond with me and before I could realize she has begun to sleep near me all the time.

She will always come near my feet and sleep just right next to my feet. She will climb up my legs and come sleep in my lap.

I did not have to compel her to do so but my bunny she understood that it is safe to stay around me.

It is not only with human, but rabbit also requires time to bond with regardless of another rabbit or any other animal.

They need time and some more time and new rabbit guardians have to be patient.

You may check out the video below to learn more on how to make your rabbit less aggressive.

Sometimes a rabbit will show aggression towards new rabbits too.

Hence, new rabbit guardians have to understand the rabbit bonding stages in order to bond a rabbit with another rabbit.

Rabbit aggression towards other rabbits.

Trying to introduce a new rabbit with your existing house rabbits can cause territorial dispute among the rabbits.

The old house rabbit may get very aggressive towards the new rabbit.

Instead of thinking the new bunny as a friend, the old rabbit may think of him as his rival.

A neutered/spayed rabbit is less likely to show that behavior, nevertheless it is not inevitable.

It is best to introduce two new rabbits slowly. This process may start with a slow and consistent introduction instead of compelling them to live together from the beginning.

If you force your rabbits to bond fast, it may cause the behavioral disorder. The older rabbit will be stressed and will not hesitate to aggressive behavior towards the new rabbit.

As a new rabbit, it will be scared and stressed by the aggressive rabbit body language. Understand this too much stress is very dangerous for rabbits and can be deadly.

The worst scenario they both will swat at each other and can create a fatal situation for themselves. It will be later expensive on your side then to visit a rabbit vet.

The only possible thing you can do is by the cautious introduction of new rabbits and by recognization of the rabbit bonding stages behavior.

Many times I have heard from pet rabbit owners regarding aggression of their rabbit inside the cage.

Why is your rabbit aggressive in the cage?

A rabbit only gets aggressive inside the cage when it has a feeling that someone or something is trying to invade its territory.

If you intend to clean your rabbit’s cage or even intend to bring your rabbit outside the cage for playing around, your pet rabbit will think it is an invasion of his/her territory.

The rabbit will become protective of its territory and show aggression towards anything that is trying to invade.

A rabbit is never aggressive by genetics, they absorb this behavior depending on their surroundings.

To prevent your rabbits from showing aggressive rabbit body language in his cage you must discover how to clean a rabbit cage properly.

As well as do not drag your rabbit out from the cage to play in his running space such in your apartment or house.

Keep their cage door open and wait for your house rabbits to come out by themselves and explore new territory.

Similarly, do not remove bunny toys and your rabbit’s litter box abruptly. Because your rabbits will be annoyed by that and consider you as their predator instead of their friends.

So give your rabbit plenty of time to trust you and then open the cage door. so that they come out of the cage by themselves.

Once your rabbit comes out, only then clean all the rabbit chew toys, dishes, water feeder, and your rabbit’s litter box.

All the cleaning must be done once the rabbit has left the cage by himself.

Also, choose the rabbit cages which I have mentioned in a previous article.

Why is my rabbit lunging at me all of a sudden?

If your rabbit is acting strange and lunging at you often, it means you as a guardian doing something incorrectly with your rabbits.

If you do not know how to pick up your rabbit or how to pet a rabbit the proper way, your rabbit will begin to be meaner towards you.

Picking up a rabbit to give a pet can cause your rabbit to think you as a predator.

So first learn how to pick up a rabbit and pet bunnies with care.

While your rabbit considers you as dangerous, annoying, and unfriendly they will definitely try to protect themselves by lunging at you.

So if your rabbit lunges at you suddenly, it means you are doing something incorrectly.

In the video above it seems like the rabbit is lunging at its owner. The owner is invading the rabbit’s space or the territory which made the rabbit extremely hostile.

Not all rabbits are born equal, as well as every rabbit has its own unique characteristics.

However, no rabbits are born as aggressive and mean. They grow a habit of being mean due to their surroundings.

So simply we can never judge a rabbit by their breed on how they are going to behave towards their new guardian or its new surroundings.

It is your responsibility to love your pet rabbits and raise them with care so that they do not show symptoms of aggression.

Click here to order the ebook How to raise healthy & happy rabbits!