Introducing a baby rabbit to an older rabbit. 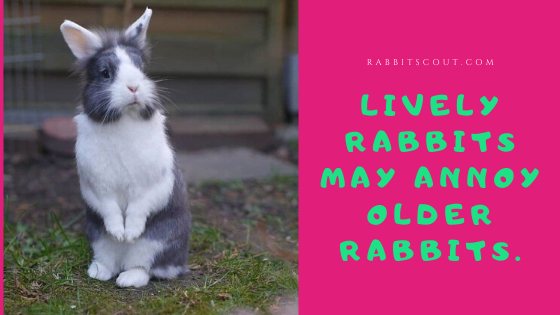 No matter how much you are willing to find a friend for your single pet rabbit, it is not always wise to introduce a baby rabbit.

It is not difficult to find a friend for your bunny. Nevertheless, bonding between rabbits of the same age works best.

Introducing a baby rabbit to an older rabbit can get complicated once the younger rabbit’s hormones kick in.

I have explained the complexities and why not to choose a baby rabbit to bond with older rabbits in this article.

Can rabbits of different ages live together?

I am sure in the wild rabbits of different ages live together. Living together doesn’t mean these rabbits bond together.

The point here is rabbits in the wild have plenty of space and a large number of rabbits.

In the wild, rabbits get to make friends with other rabbits of the same age.

Although growing up with older rabbits, youthful rabbits in the wild have the option of befriending rabbits from a different age.

Initially, a rabbit might live in harmony with an older rabbit, but as time passes by and the hormones thrust in, the younger rabbit can choose someone similar to its age to bond.

Option of choosing friends is not possible for domestic rabbits. Compelling two rabbits to bond is a common practice. YES, I think following bonding steps is a way of forcing rabbits to learn about each other.

I am not saying it bonding rabbits is terrible, it is merely my thoughts.

Thus, rabbit guardians may introduce a baby rabbit to its single rabbit with good intention.

Multiple rabbit guardians don’t recognize what consequence may it bring once the younger rabbit grows up.

As well as, in many cases, the older rabbit will not accept a young rabbit in its territory.

So the older rabbit will act hostile towards the younger rabbit.

Can you put a baby rabbit with an older rabbit?

No, you cannot put a baby rabbit with an older rabbit without proper introduction and following bonding stages.

I mentioned earlier bonding as a compelling technique, but it is essential to bond rabbits in the household. Without bonding, a pair of rabbits might fight to the death.

The rabbit guardian may not have a lot of options, and you may compel a relationship between an older rabbit with a younger one.

It is not going to be easy to do so.

There are two possible reasons.

I will discuss the second issue in this article because it is more relevant to the readers.

I will use the example of a rabbit, which is two months old. On the other hand, assuming you own a neutered male rabbit that is one year old.

The one-year-old rabbit doesn’t have any issues with hormones. This rabbit is well trained and is perfect for bonding.

Now that you start to think this rabbit is lonely, you decide to introduce another rabbit to him; thus, your rabbit can have a playmate.

Afterall the one-year-old rabbit is more prominent in size.

Well, that is not the actual problem. The primary obstacle is you cannot desex a rabbit until it is four to seven months old.

So you have to introduce this baby rabbit to your older rabbit at this age, and intact.

I will suppose you succeeded in bonding the young rabbit to your older rabbit after following the rabbit bonding stages. The bonding process at this stage will take one month at most.

Let me clarify the scene a bit more.

Your older rabbit has accepted the younger rabbit as his friend.

You will waste your time trying to work on their bonding.

However, in your scenario, I am guessing, the older rabbit is ignoring the two months old rabbit in the territory.

Instantly you might think that these two rabbits will live in harmony forever.

You can be very mistaken about this plot. The dilemma will begin when your younger rabbit becomes six months old.

Your younger rabbit is intact as you had no way of desexing a two months old rabbit.

The level of hormone in your young rabbit will rise with its age and its hostility towards the older rabbit.

Remember how I set the example with the older rabbit being neutered.

In this case, the older rabbit is calm because his altered condition keeps him in balanced behavior.

Why will the younger one do so?

At first, the younger rabbit might not have bothered too much about the older rabbit.

As it grew up and hormones kicked in, the younger one will strive for dominance.

On the contrary, the older rabbit, which has always been dominant in the territory, now will defend.

And both of these rabbits will end up fighting each other. And once a rabbit pair starts fighting, it becomes pretty impossible for them to ever bond again.

Once you notice the rabbits fighting, it is essential to create a barricade between them.

You have to separate these two rabbits, and to separate bonded rabbits comes with consequences.

After your separate two rabbits, they will probably forget each other quicker than you can presume.

These events will take you back to your primary situation. But this time with two single rabbits.

What was your primary situation?

You attempted to introduce a baby rabbit to an older rabbit.

Once these rabbits started attacking and you separated them, you will have to try to bond the younger rabbit again to the older rabbit.

And I can’t assure you these two rabbits will bond again after they have fought with each other.

Even if they temporarily bond together for a while, there is no guarantee the younger one will not trigger a fight.

Hence understand that you will be repeating the same process of bonding every time you attempt to bond these rabbits?

Not just that, as a guardian, you will have to keep an eye on these rabbits to prevent them from injuring each other.

I believe anyone who is reading this post is willing to bond a baby rabbit to an older rabbit.

My opinion for you is this:

Never bond a baby rabbit to an older rabbit.

I have created a whole plot in this post to discuss the unfortunate events that will trigger by forcing rabbits of different ages to bond together.

It is best to bond rabbits of the same age and the opposite sex.

4 Replies to “Introducing a baby rabbit to an older rabbit.”