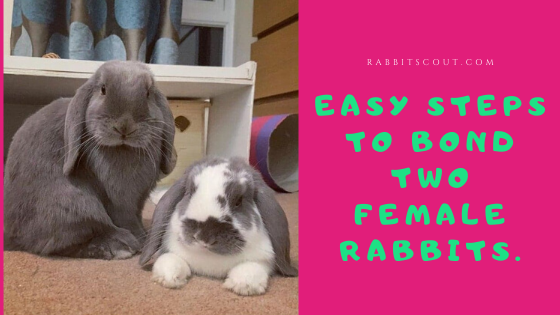 Bonding two female rabbits is not an impossible task if the rabbit guardian does it the correct way.

Having two female rabbits can cause a deadly fight in the scene if proper measures are not taken like described in this post.

In this post, I wrote about how to bond two female rabbits without complications and allow them to live in harmony.

Can two female rabbits together?

Thus if two female rabbits bond together, only then can they live together.

But bonding female rabbits come with some other complications. Several measures must be taken before trying to bond female rabbits, such as spaying the rabbits.

I have seen several house rabbits living and playing together. And surprisingly, I have seen pairs that are both females, and they are chasing and grooming each other.

Regardless of gender, it is best to desex rabbits before bonding them with each other.

Spaying/neutering a rabbit will aid in a healthy life for rabbits. Desexing a rabbit contributes to a longer lifespan in house rabbits. Likewise, after a few weeks from desexing, as the hormone will slowly wear off from their body, the rabbits will become less aggressive.

It is tough to bond unneutered/unspayed rabbits because the hormones in their body will keep them aggressive towards the other.

If the older female house rabbit is more prominent in size and shape, your new rabbit will suffer as soon as you bring them together.

You might wonder what if only one rabbit is spayed and not the other?

I know spaying a rabbit can be costly in some places as they can’t be treated with ordinary veterinarians. But the best practice is to spay both rabbits before the introduction process begins.

I cannot positively say the bonding process will work if one of the female rabbits is unspayed.

How to bond two female rabbits?

Assuming you own a pet rabbit that is a female. Your cute pet does not have any bunny friend. So, you want to present her with a new bunny friend.

There are rabbit owners that cannot spend adequate time with their pet rabbits, which results in a lonely rabbit.

I have seen rabbit owners that have one rabbit initially, and they enjoy the rabbit’s companion.

Similarly, the house rabbit enjoys the companion of their guardian.

Rabbits are not lonely at all if the rabbit guardian spends adequate time with the pet rabbit.

Nevertheless, in some cases, the rabbit guardians may get busy with work and can’t manage enough time to play with the rabbit.

That may cause loneliness in rabbits, and the rabbits will suffer.

Hence many rabbit guardians, once they realize they are spending sufficient time with their pet rabbit, buy a new rabbit.

However, trying to bond a male rabbit and a female rabbit is an excellent idea.

Because the process will be a lot easier, unlike bonding rabbits of the same sex. The situation will be a lot worse if the rabbits are not desexed.

However, the topic of this article is about bonding two female rabbits, and I will not discuss anything which is not related to the issue here.

What are the steps for bonding two female rabbits?

You already own a female rabbit and raise it in a free-range environment.

A free-range environment such as the pet rabbit has access to most rooms in your house and has a cage where she goes to relax only.

Rabbits growing up in such conditions consider most of the house as her territory.

Although your rabbit is litter trained, occasionally, she will poop here and there within the house to mark her territory.

I am using this example because bonding such a female rabbit will be the most complicated of all.

Because most of your house is the rabbits running space and she considers it as her territory.

If a rabbit stays most of his/her life inside a hutch, then only the hutch will be the rabbit’s territory.

Thus trying to bond a free-range female rabbit will be considerably hard because a new member in her territory will not be taken lightly.

On the contrary, it will be difficult for you to find a neutral territory to introduce the older rabbit with the new one.

The first thing to do is when you get your new female rabbit, you must visit a vet to spay her and ensure her longer lifespan.

Likewise, if the older rabbit in your house is unspayed, you must take her to a vet to do the same task.

Until today if you have believed your female pet rabbit behaves nicely then, you might be wrong. As your pet rabbit had no competitor in her territory, and she did not feel any threat. Therefore she had no one to fight.

Hence, spaying your older rabbit is crucial because if she is unspayed and meets a younger female rabbit, she will bring down wrath on the newcomer.

So Step 1 is ensuring the female rabbits are desexed, and at least a couple of weeks have passed after the desexing.

Now the introduction process must start assuming both female rabbits are spayed.

At this stage, what you must do is find a place where the older rabbit never goes.

Consider that location as neutral territory.

If the older rabbit is in neutral territory, then she has no reason being territorial.

You must do that so that both the female rabbits at this stage will not consider the other one as a threat.

And keep the two female rabbits in two separate enclosures.

Do not set the cages so far that the rabbit cannot communicate and not so close that they can grab each other to fight.

Give these female rabbits new litter boxes with fresh hay. Do not give them any litter box that has the smell of older rabbits.

Now there is a trick you can do.

You can interchange the litter boxes every two days during the bonding process.

I mean, you can take the litter box from the older rabbits cage and shift it to the newcomer’s cage.

Similarly, take the newcomer’s litter box and place it in the older rabbits cage.

That way, they both will get used to the smell of each other. And being in neutral territory, they will not count each other as a threat.

Now it is your turn to observe the rabbits. You have the rabbits in the cage doesn’t mean you are done with the process.

You have to keep your eyes on the rabbits.

Do not allow the rabbits to stay on the opposite side of the cages. If they are sitting on the furthest corner from each other, then it means they don’t like each other’s companion.

It is a sign for the female rabbits that they can’t stand each other.

Consequently, if you notice such behavior, bring the rabbits close to each other inside the cage.

Do so for at least a week. By this time, observe their behavior.

You can at least assume now that the rabbits are used to each other’s smell.

Yet do not judge that they will bond with each other unless you see them inside one cage.

Now, the next step is to let the rabbits outside of the cage together. Do this in the neutral territory, and keep eyes on them. You can let them out together for hours in the beginning.

You must slowly increase the time they spend together.

First, let them spend 15 minutes together and observe their behavior during the period.

See if they are aggressive or they are staying far from each other.

IF they start to fight with each other, immediately stop them and place them back into the individual enclosure.

At this stage, if a female rabbit is yet acting territorial, highly likely, it will be the older one. So keep an eye on the older one so that she behaves appropriately with the newcomer.

The older rabbit may mount the younger rabbit to prove her dominance and claim her territory. She might spray urine and poop around this unclaimed territory.

If she does not, then you must place them back into their x pen and go back to STEP 4 again.

Allow the rabbits to stay close to each other. Compel them to get used to with each other’s smell by frequently shifting their litter boxes.

Also, pet them frequently one after another.

That way, the rabbits will get used to the smell of the other female rabbit’s smell from your hand.

They need to be comfortable with each other.

If you fail at step 5, do not give up yet. Bonding same-sex rabbits are intricate work.

If you have chosen to complicate things by bringing two female rabbits home, then you have to take the hassles.

Step five might take you back to step 4. In case you pass level 5, now you may allow the rabbits out of the cage frequently.

Always be observant of their behavior. You are the guardian, and if you notice anything unusual, take them back to their cages.

But give them more time to play together gradually. Suppose start by 15 minutes everyday, and progressively raise to 30-40 minutes and 1 hour.

The whole process may sound very complicated before you work on it.

But once you see your female rabbits living with each other in harmony, you will realize the time commitment has paid off.

Bonding two female rabbits is not impossible, but the task is intricate.

If you follow the steps, indeed, you can bond two female rabbits.

Usually, bonding rabbits may take only two weeks. All the steps I described above can be completed within two weeks.

If a human meets another human, it may take a while for person A to befriend person B.

They will need some time to become friends at first. Then after a few more dates, they will become close to each other.

And casually, they will create a bond, and person A will become friends forever with person B.

The same is applicable for bonding rabbits, regardless of gender.

Although in most cases, two female rabbits will get used to each other within a month or two, in more complicated cases, it will take up to six months.