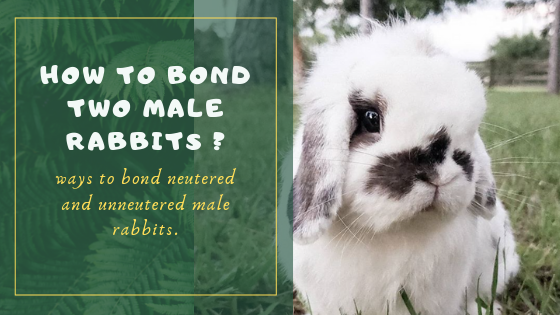 Bonding two male rabbits regardless of neutered or unneutered is not a problem at all. Only you have to understand and introduce these two rabbits in a conventional way.

I have introduced a new male rabbit to my existing house rabbit and they have bonded successfully. Therefore in this post:

I have explained about the best techniques and the proper way for male rabbit owners to bond their rabbits.

In order to bond two male rabbits, a rabbit guardian has to place little effort and patience as well as a gradual introduction of the new male rabbits.

To build friendships between two male rabbits the rabbits must be neutered first.

After neutered, you can allow some time for the male rabbits to get used to with each other and eventually they will become good friends.

Rabbits are very cute small house pets. Although they are cute and small, they can become very destructive often.

The reason for a rabbit to become destructive is that they are bored.

Rabbits can be bored very easily. To keep your rabbits calm and lively you can provide them different rabbit chew toys.

On the contrary, rabbits are very sociable animals too. Without having a partner they will be lonely and not so lively.

Hence it is suggested for every rabbit guardian to have a couple of pet rabbits in the house.

If you don’t want to have a couple of pet rabbits you can have a single rabbit but manage time every day to bond with your delicate small pet.

Perhaps you can’t manage time and you have decided to bring a new rabbit in the house to have friendship with an already existing one.

That is not a bad idea at all. Wait for four weeks after your rabbits are neutered then start the introduction process with the old rabbit.

Assuming your old rabbit is already neutered and will not show any aggression towards the new rabbit.

So after both the new and the old male rabbits are neutered, you must wait for at least four weeks.

Only then you can introduce your rabbit in the common territory.

The territory where the old rabbit has been staying for a while now, he may find it uncomfortable or get stress from having to see a new male rabbit in his territory.

Introduce them in a common ground, yet keep them separate using a playpen probably.

Do not allow the two rabbits in the same cage at the beginning. Even if they are neutered, the old rabbit may show aggressive rabbit behaviors.

While you keep the rabbits in a common ground and separated yet close to each other, the rabbit will slowly learn about each other.

They will get used to with the other rabbit’s behavior, and smell.

You have to always keep an eye on the rabbits, how they are acting towards each other.

If you notice that the rabbits are not coming close to each other then you must stop the introduction process.

Any unusual behavior rabbit signs of stress mean you must try to introduce them after a few days.

As I have mentioned earlier it is vital for the male rabbit to be neutered before they are introduced to each other.

As rabbits are very social animals as well as can be very territorial too. An unneutered male rabbit tends to show aggressive body language towards other rabbits.

In case you introduce a new buck to an existing old one, and the old male rabbit must be neutered beforehand.

In order to build bonding among two male rabbits, you must follow the steps and procedures mentioned above.

Some rabbit guardian may try to bond unneutered male rabbits, which is not possible.

Unneutered male rabbits will act territorial and get aggressive with each other. If you try to force them to bond it may result in stress for your rabbits.

Make sure both the male rabbits are neutered and they will learn to build a friendship rather than fighting over territory.

Introducing the third rabbit to an already existing couple.

Click here to order the ebook How to raise healthy & happy rabbits!