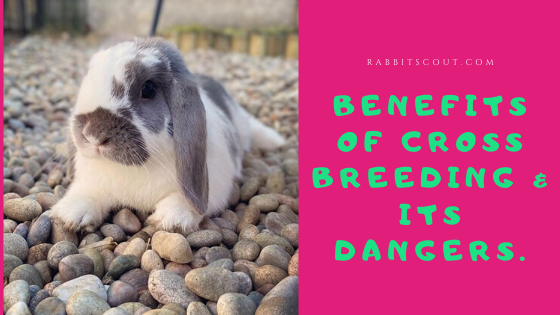 You own rabbits of different breeds, and right now, wondering, is it a good idea to allow these rabbits to mate.

The term used for mating rabbits of various breeds is known as cross-breeding.

Cross-breeding is good, but there are several limitations to doing so. Extravagantly mating rabbits to create a unique breed of rabbit is not the greatest idea.

First, I want to define some terms that are common in the breeding rabbit society.

Now that you are familiar with the terms related to breeding rabbits let’s discuss the most critical subject of this post.

What is cross-breeding, and how safe is it?

Cross-breeding is the process of mating rabbits of two different breeds.

So if you were questioning if two different breeds of rabbits can mate or not, the answer is indeed they can.

Two different rabbits can mate and reproduce healthy rabbit kits. Holland lop is a favorite house pet, and it is a mixed-breed rabbit.

However, the rabbit society does not recognize all the mixed-breed rabbits.

Only sometimes these rabbits are recognized as a new breed, and often no official recognition is given due to many factors.

Nevertheless, most of the aspects that concern mixed-breed rabbits’ is regarding their health.

After having three generations of the same rabbit breed, and with no signs of health issues, the rabbit society may give recognition to these new hybrid rabbits.

Is it safe to mate rabbits of different breeds?

There is nothing wrong or controversial about breeding rabbits from two different breeds.

A doe will give birth to healthy kittens after mating with a buck from another breed.

But there is one crucial factor a rabbit guardian must consider before bringing two rabbits from different races together for mating.

Regardless of the rabbits’ breed, the doe must be from a giant breed rather than the buck.

If the doe is from a smaller breed, and the buck is from a giant breed, there can be a lot of complications:

That way, the doe will give birth to healthy kittens without any complications.

Cross-breeding rabbits is not a problem in itself. The difficulty arises when a rabbit keeper tries to improve a breed.

What is improving a rabbit breed?

Improving a rabbit breed means when a rabbit guardian tries to mate a crossbred doe with a crossbred buck. Mating two crossbred rabbits can result in very unique looking kittens.

However, these unique looking kittens will likely be born with several health issues.

In some cases, the kittens will die soon after birth. These kittens may even have defects in their body.

Hence improving a breed of rabbit is a very controversial topic.

I don’t recommend improving a rabbit breed merely to own a distinct looking rabbit.

I know there are many crazy people in the world and love doing crazy things.

But I have never thought it is right to torture any animals merely for the fantasy of the human mind.

If you want to breed a couple of hybrid rabbits, make sure these two mixed-breed rabbits are at least the third or the fourth generation of their breed.

If the fourth generation of a unique crossbred doe mates with another fourth-generation crossbred buck, the offspring of these two rabbits will have no health issues.

Without feeble health conditions, the kittens will be safe and grow up as lovely and unique looking rabbits.

After a few generations of this new hybrid, you can consider these rabbits as a new breed of rabbits.

What are the benefits of cross-breeding rabbits?

There are numerous mixed-breed rabbits out there, and they look adorable and gorgeous.

Did you know that Holland lop is a crossbred rabbit?

In 1949, a dutch breeder figured out Netherland dwarfs are undersized rabbits. On the contrary, french lops weigh more than 10 pounds.

As a result, he decided to cross-breed these two breeds of rabbits, hoping for offsprings that will have a standard size.

Likewise, the Netherland dwarf dam met its demise due to the breeding process.

Luckily, the dutch breeder decided to mate a Netherland dwarf buck with a french lop doe. This time his cross-breeding was a success. The offsprings were healthy and thus the french lop damn.

After a few more experiments and successful attempts, Holland lops have become a hybrid and adorable looking rabbits.

In 1964, finally, the Dutch breeders authorities recognized Holland lops as a breed of rabbit.

So what have you understood from this example?

Like I mentioned earlier, it is not safe to breed a smaller sized doe with a larger buck.

If the cross-breeding is done correctly between a doe and a buck of two different breeds, the result can be impressive looking rabbits. The rabbits will be healthy, and they will have distinct appearances.

Cross-breeding is not bad at all. But attempts to improve a rabbit breed is dangerous.

Different rabbit breeds have distinct features and unique characteristics. In most cases, for any animal, cross-breeding can result in a better hybrid offspring.

Many characteristics in a breed develop due to cross-breeding the rabbit with another family of rabbits.

So are there any benefits of cross-breeding rabbits?

Indeed there are. Cross-breeding these tiny animals is fine if you know and follow a few correct steps.

If you are planning to continue with the breeding process, missing out on this crucial point can be deadly for your pet rabbits.

The bigger the difference in the parents’ breed, the more distinct features you may be able to see in your new hybrid rabbits. However, you must avoid mating your hybrid rabbits until they are the fourth generation of their mixed-breed.