How do rabbits protect themselves from predators? 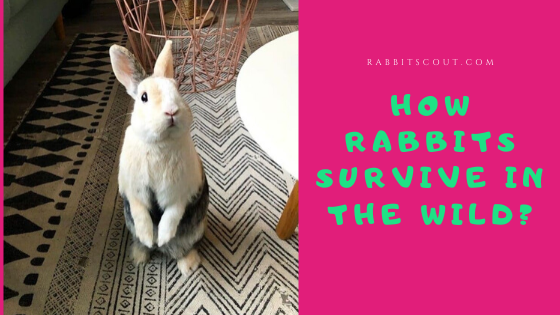 Domestic rabbit guardians are aware of the danger of their pet rabbits from predators. Yet many rabbits guardians prefer raising rabbits outdoors.

But that is not the topic of this article today. In this article, I have explained how rabbits protect themselves from their predators.

Although a prey animal, rabbits surprisingly have many characteristics, which help them defend from predators.

Likewise, rabbits can protect their territory to keep their kittens safe.

Knowing about these will not ensure domestic rabbits’ safety, but it is undoubtedly an exciting read for bunny lovers.

What adaptations do rabbits have to survive?

Rabbits are cuddly animals, and nature has gifted them several defense techniques, to prevent themselves every day.

They are most active during dawn and dusk. Dawn and dusk is the transition period for most predators. During these hours, predators are likely going for sleep or taking a rest.

Thus rabbits can safely forage and play around during these times, avoiding their predators.

Having eyes on the sides of their heads, rabbits have almost 360 degrees vision.

This 360 degrees vision keeps rabbits extra safe from predators. No matter from which side a predator approaches for an attack, highly likely, the rabbit will notice the predator.

A predator may attack from the right, left, top, or behind. Rabbits have sight in all directions.

The rabbit will freeze or run depending on the severity of the attack.

Rabbits have a range of hearing, similar to humans. However, rabbits can listen to higher frequency sounds than humans. Therefore rabbits detect noises which are far away.

If an animal is approaching the rabbit, the rabbit can immediately be aware of the danger in that situation.

Being aware of the predator in the vicinity will enable the rabbit to take quicker precautions.

Have you noticed how your rabbits are always sniffing the air? This is a way for rabbits to detect danger.

Rabbits have a definite sense of smell. If they smell anything unusual in the area, they will take precautions.

Such rabbits can smell a predator approaching even from a far distance. Without the predator coming close, the rabbit can run for its tunnels.

The moment rabbits sense anything unusual, they will sniff to figure out any odd smell around them.

Rabbits are incredibly silent and odorless.

Rabbits being a prey animal, it is only reasonable for them to be silent. They are calm animals and do their things quietly. That way, they are not easily exposed to other wild animals. Interestingly another thing about rabbits is that they are odorless.

Many people ask me this question: do rabbits smell or not before adopting a pet rabbit.

The answer is satisfying. No rabbits do not smell at all. It is because they are self-grooming animals as well as nature has gifted them in such a way to keep themselves safe from their predators.

Being odorless, predators cannot detect rabbits quickly. Attacking animals cannot only rely on a rabbit’s smell to find the location of rabbits.

Because they are odorless, the attackers will be confused quickly with other smells.

Being quiet animals, the task of hunting a rabbit becomes yet more complicated for predators.

This combination helps the rabbits as well during a threat from a predator.

Rabbits can run very fast. They are swift and can run as fast as 25 mph.

The longer legs are a huge benefit for rabbits when they are running uphill.

A predator like a coyote cannot run as fast a rabbit while climbing uphill.

The longer hind legs of rabbits and shorter forelegs are a benefit for rabbits to keep their pace running uphill.

And rabbits understand this very well and use it to their benefit to stay ahead of their predators.

Rabbits live in warrens and feed near them.

It may sound exciting that rabbits like to live in tunnels. But there is a definite reason behind why rabbits construct tunnels as their home. Rabbits build their tunnels and sleep inside them.

Warrens are a group of tunnels that connects rabbits home with several exits.

Thus if a rabbit considers danger, they can hide in their tunnels. They can enter through one tube and exit through an opening in a different location.

A more significant predator cannot enter a tunnel with a small opening.

However, predators such as snakes might manage to enter a tunnel. Nevertheless, the rabbit can exit the shaft with an opening on the other side. Before the snake can reach for the rabbit, the rabbit will be out and lost in the wild.

That way, anytime a rabbit senses an attack is approaching, rabbits can immediately run back inside the tunnel. As I have mentioned already, these tunnels are connecting with several other rabbit homes, which allows the rabbit to exit through another side.

How do rabbits fight predators?

Well, rabbits do not fight predators, but they have learned how to prevent themselves from attacking animals.

A rabbit will truly fight a predator when the rabbit has no alternative option.

In many cases, a rabbit fighting against a giant predator will ultimately result in the rabbit’s demise.

Foremost rabbits are prey animals. Wild rabbits know the number of threats they have, hence these wild rabbits always lookout for predators.

They have excellent eyesight, sense of smell, and good hearing. Similarly, rabbits are intelligent animals and have learned to use their characteristics against threats.

If a rabbit feels a predator is approaching them, they can signal other rabbits in the group by making a thumping sound.

Rabbits like to feed near the tunnel openings and remain in large groups.

Once one rabbit senses danger, it can make sound by blowing its hind legs on the ground.

Rabbits have a few techniques to defend attacking animals.

Rabbits will commonly freeze at the spot when they notice a predator once they freeze in the place they can create a camouflage to hide from the predator’s eyes.

By freezing and blending in the environment, a rabbit can hide from the predators. The predator with lost signs of a potential meal will forget about the target and look for new prey.

If a predator is pretty close to the rabbit, then blending in the environment is not reasonable anymore.

At that moment, realizing the danger, a rabbit will flee.

Rabbits can move swiftly, and taking quick steps to run away from the predator can save a rabbit’s life.

They can run very fast, and as I told earlier, they usually have their food near their home.

Going too far can be dangerous for them.

Rabbits also have an advantage over their predators while running uphill due to longer hind legs than forelegs.

Rabbits will hide inside warrens.

Rabbits will run and quickly get inside the tunnels they have built.

Most predators will give up once a rabbit enters the tunnel.

Because when the rabbit enters the tunnel, probably the rabbit will try to escape the shaft through an exit on the other side.

As rabbits’ burrows have numerous exits, it is best for the attacker to not wait on the other side of the tunnel.

Because indeed, the rabbit can leave the tunnel using any exit out of the multiple ones.

The tunnels are narrow and suitable only for rabbits to pass through.

A rabbit’s last resort is a fight.

Once a rabbit runs out of options and can’t figure out ways to escape anymore, the rabbit will stand its ground.

A cat can be injured if a rabbit kicks with the hind legs. Likewise, rabbits can use foreleg claws to defend themselves.

A rabbit will not always succeed in its fight for defense, but many times they can escape the predators by fighting and fleeing.

However, fighting is the last stand of defense for wild rabbits. It is more common for rabbits to flee once they sense danger.