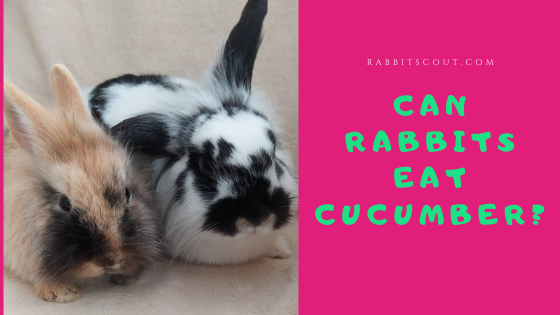 Do you want to feed cucumbers to your pet rabbits, but you are skeptical about the idea?

Cucumbers are nutritious vegetable, and it is excellent for hydrating ourselves. In this post, you will know whether cucumber helps the rabbits diet similarly or not.

Most people consider cucumber as a vegetable, but the truth is that cucumber is not a vegetable.

Cucumber is a fruit, and most fruits are only good as treats for rabbits.

Cucumber is a fruit, and they are not toxic for rabbits. Thus Rabbits can eat cucumbers in moderation.

Cucumber can benefit rabbits as a treat. A fruit like cucumbers can alter rabbits’ healthy digestive system if rabbits consume cucumber excessively.

Now you know that rabbits can eat cucumbers; however, you must understand why cucumber is unhealthy for rabbits before serving it.

We prefer to have cucumber because cucumber is high in fiber and contains a lot of water. For human eating plenty cucumber will not effect as the water in cucumber is not going to hurt us much.

Also, cucumber is recommended for obese people’s diet. If an overweight person eats many cucumbers, it will make the person’s stomach full quickly, and he will have less craving for other food. Similarly, cucumber has almost no fat which is suitable for a fat person’s balanced diet.

If you feed your pet rabbits excessive cucumber, the water content in the cucumber will give diarrhea to your rabbits.

As a rabbit guardian, I don’t want my rabbit to get sick, and it’s our responsibility to take care of our pets.

If a rabbit has loose stools, your pet rabbit will be dehydrated, and dehydration can become fatal for rabbits.

As cucumber has minimum nutrition and health benefits for rabbits, satiety with cucumber will only contribute to soft stools for rabbits.

In addition to that, your rabbit will quickly lose weight if they only depend on having cucumbers.

Hence, you can serve cucumber to your pet rabbits occasionally.

Cucumbers are not a meal replacement. It’s only a treat for your pet rabbits.

Give them cucumbers only bring variation in their taste bud and simultaneously keep a healthy balanced diet for them.

How much cucumber is suitable for rabbits?

Feed cucumbers as occasional treats. So how often and how many cucumbers will not affect rabbit’s health?

You can give a thin slice of cucumber to pet rabbits and not more than that for each serving.

A thin slice with skin per serving is best for pet rabbits. Give your pet rabbits enough cucumber to be satisfied but not to fill up their stomach.

Giving rabbits cucumbers more than three times a week can make them sick, and we don’t want that for our rabbits.

How to feed cucumbers to rabbits?

Don’t feed more than a thin slice of cucumber per servings. As I mentioned, this cucumber skin has more nutritional value than the cucumber flesh. Cucumber skin is also fiber-rich, which is an essential component of a rabbit’s diet.

But cucumber skin may have pesticides and other harmful chemicals on the surface. It’s crucial to rinse the cucumber in water thoroughly before serving it to pet rabbits.

If they don’t like cucumber treats, serve them other treats available to you.

When you introduce cucumber to your pet rabbits, it is crucial to monitor your rabbits’ behavior for the next twenty-four hours.

Typically, rabbits have loose stool after consuming a portion of food for the first time. If the condition pursues more than 24 hours, you must take your rabbits to the vet and never serve cucumber to your pet rabbits again.

A rabbit not defecating loose stools within 24 hours means your rabbit’s digestive system responded well to the new diet, and you can give them cucumber again after a day or two.

Is cucumber suitable for overweight rabbits?

I believe a vet will not advise feeding cucumbers more than three times a week and no more cucumber than a thin slice.

Cucumbers are alternative to sugary treats for overweight rabbits.

So if you think you want to help baby rabbits grow quicker by feeding them something extra, then you are mistaken. Rabbits have a very delicate digestive system. Feeding rabbits anything out of the ordinary interrupts the normal digestion process. If you feed cucumbers to baby rabbits, the fragile digestive system of pet rabbits might fail and bring about death.

So never allow baby rabbits to eat or drink anything else except their mother’s milk.